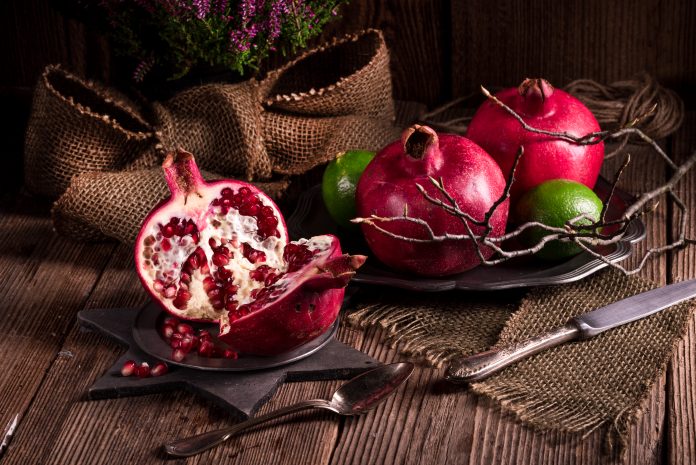 The pomegranate is an early fruit native of Persia, Pakistan and Afghanistan which was cultivated and naturalized in Georgia, Armenia and over the entire Mediterranean area and northern India since ancient times.

It’s mentioned several times in the Old Testament, and the ancient city of Granada in Spain was renamed after the fruit during the Moorish period. The pomegranate tree was introduced into California by Spanish settlers in the early 18th Century, and is now widely cultivated in that state in addition to in Arizona.

With a rich history in myth, art and symbolism, the pomegranate was thought by some scholars to be the forbidden fruit, which tempted Eve, rather than the apple. Due to the intense ruby colour of its edible seeds, the pomegranate has been an inspiration to a lot of artists of the area.

The pomegranate is used for medicinal purposes in Persia, Georgia and India, and has always been a significant part of the Middle Eastern diet. In its long history, the pomegranate has been associated with health, fertility and rebirth.

In our times of nutrient enlightenment pomegranate is now the super- food “par excellence”, mainly due to its antioxidant properties. Studies have shown that the pomegranate fruit and its juice can help with cardiovascular disease, as it reduces blood clots and has the harm done to the arteries .

Other than having an excellent heart tonic, the pomegranate also helps with other issues related to ageing because of the fact it is packed with antioxidants, vitamins, potassium, folic acid and iron.

Pomegranate fruit extracts can block enzymes that contribute to osteoarthritis. Pomegranate -specifically – has been shown to have antioxidant and anti-inflammatory properties which have potential therapeutic benefits in many different diseases. It has the ability  to slow the deterioration of human cartilage.”

Preparations of different areas of the plant blossom, fruit, bark and juice have been used for a range of ailments including gastroenterological ailments such as diarrhea, dysentery and stomach ulcers.

Slice the crown end off and lightly cut the rind vertically from top to bottom in quarters. Place the pomegranate in a bowl of water. Carefully break the sections apart, (pomegranate juice stains!) Prying the seeds out of the membrane with your palms. Remove the mucous membranes that separate the clusters of seeds. The seeds will sink and the rind and membranes will float. Gather up the seeds in a colander.

Finely chop the garlic, onion, chilies serranos, and coriander leaves. Place in bowl and add lime juice and salt, set aside. Peel and pit the avocados and place in a bowl. Mash with fork gradually adding the tbsp of pomegranate juice. Add garlic and onion mixture and fold together to make a coarse pulp. Gently fold in pomegranate seeds. Serve with warm tortillas, tostadas, or corn chips.