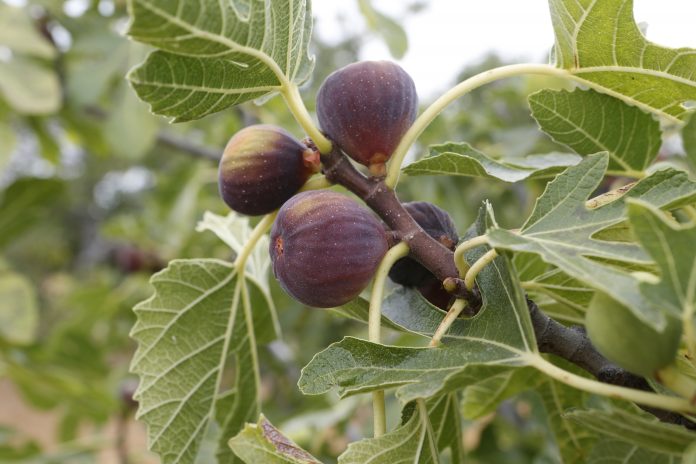 The fig is the edible fruit of Ficus carica, a species of small tree in the flowering plant family Moraceae. Native to the Mediterranean and western Asia, it has been cultivated since ancient times and is now widely grown throughout the world, both for its fruit and as an ornamental plant. Ficus carica is the type species of the genus Ficus, containing over 800 tropical and subtropical plant species.

Fig plant is a small deciduous tree or large shrub growing up to 7–10 metres (23–33 ft) tall, with smooth white bark. Its large leaves have three to five deep lobes. Its fruit (botanically an infructescence, a type of multiple fruit) is tear-shaped, 3–5 centimetres (1.2–2.0 in) long, with a green skin that may ripen toward purple or brown, and sweet soft reddish flesh containing numerous crunchy seeds. The milky sap of the green parts is an irritant to human skin. In the Northern Hemisphere, fresh figs are in season from late summer to early autumn. They tolerate moderate seasonal frost and can be grown even in hot-summer continental climates.

Figs can be eaten fresh or dried, or processed into jam, rolls, biscuits and other types of desserts. Since the ripe fruit does not transport and keep well, most commercial production is in dried and processed forms. Raw figs contain roughly 80% water and 20% carbohydrates, with negligible protein, fat and micronutrient content. They are a moderate source of dietary fiber.

In 2018, world production of raw figs was 1.14 million tonnes, led by Turkey and North African countries (Egypt, Morocco, and Algeria) as the largest producers, collectively accounting for 64% of the total.