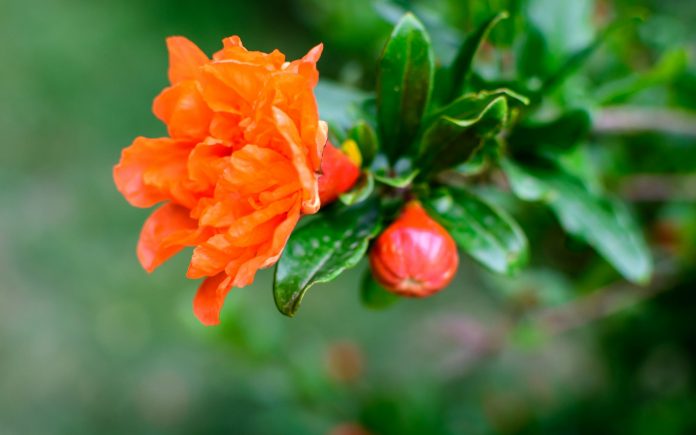 Due to the numerous seeds found in pomegranate fruits, they have been considered as a sign of fertility from the ancient civilizations of Egypt, Greece, and Rome. The Greek author, Homer, wrote about pomegranates growing at Syracuse, on the island of Sicily. The Bible of the Hebrews records many references to the pomegranate, and the picture of the fruit was used widely in molding and stone sculptures found in Solomon’s temple in Jerusalem, Israel.

Cultivated widely in Spain, pomegranates moved with the missionaries to Mexico, California, and Arizona from the 16th century. In America pomegranate trees were introduced to California by Spanish missionaries in the mid 1700’s. Granatapfel fruits are ruby-red fruits about 2 to 5 inches in diameter. They resemble small apples, and derive their name from the French phrase, ‘Pome,’ meaning apple. Fruits have numerous seeds are each surrounded by a pink to purplish-red, juicy pulp that’s the edible portion. The pulp is somewhat puckery to the flavor.

Pomegranates, ‘Punica granatum,’ are dense, bushy shrubs 6 to 12 feet tall with thorny, slender branches which might be trained into small trees. Orange-red flowers appear on new growth in the spring and summer and are bell-shaped and vase-shaped. The vase-shaped flowers are typically sterile, so they won’t develop into fruit. The fruit includes numerous seeds surrounded by pink, sweet, juicy, tasty pulp coated with leathery-brown to red, bitter skin, which can be easily peeled. Pomegranate juice stains can be tough to remove from clothing. This juice has been used by the ancients as an ink or dye, due to its persistence in staining permanently. The thick skin enclosing the pomegranate is high in tannins, as well as the ancients dried the skins and made leather-like goods; the thick skin gives the fruit a long shelf life, lasting up to 2 months when chilled.

When trained as a shrub, pomegranates grow toward a bushy habit with many suckers arising from the crown and root area. Tree-type plants could be produced by allowing just 1 trunk to develop. Additionally suckers can be removed frequently around the primary trunk.

Mature pomegranate trees create a thick bark, which can be cold hardy to temperatures analyzed in Georgia and have withstood the zero degrees Fahrenheit experienced in January of 1984. Younger trees and shrubs of pomegranate have thin bark which don’t demonstrate a higher survival rate in lower temperatures, but the plant could be regenerated in the roots in the spring. Light yearly pruning of established trees promotes the development of high quality fruit. Late or excessive applications of fertilizer will delay fruit maturity and will decrease color and quality.

The commercial orchard creation of pomegranates is largely concentrated in California, and the fruit begins to appear in Eastern markets in mid-October, just in time for the Thanksgiving and Christmas seasons.

Like choosing wild scuppernongs from a youth vineyard, this can be an adventure that kids always remember–the pleasure and the satisfaction of the happy days during youth preserved in the memories of growing up. A century ago every farmer had a pomegranate plant in his yard that he had grown from a seed. Some of those plants developed into bushes and some grew into trees.

The fruit is odd appearing in appearance and when opened with a knife looks even stranger in looking like countless succulent red, person pulpy fruits, each with a removable seed Pomegranate juice is one of nature’s most powerful antioxidants. Pom Wonderful Pomegranate juice has more naturally occurring antioxidant power than any other beverage, more than red wine, green tea, blueberry juice and cranberry juice. Antioxidants help your body shield against free radicals; molecules which can cause premature aging, heart disease Alzheimer’scancer. Drink a glass now!