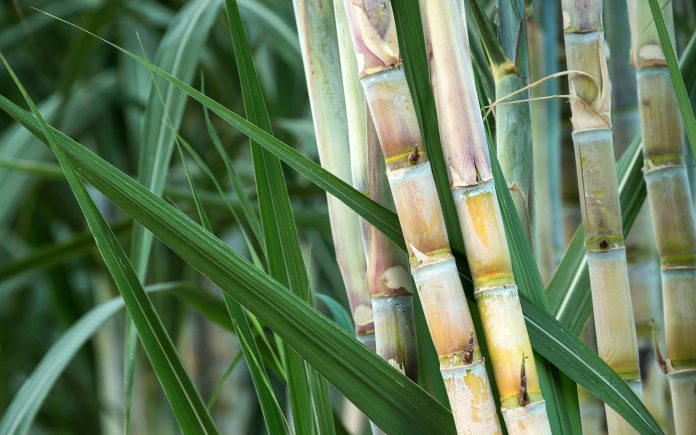 Sugarcane or sugar cane refers to several species and hybrids of tall perennial grass in the genus Saccharum, tribe Andropogoneae, that are used for sugar production. The plants are 2–6 m (6–20 ft) tall with stout, jointed, fibrous stalks that are rich in sucrose, which accumulates in the stalk internodes. Sugarcanes belong to the grass family, Poaceae, an economically important flowering plant family that includes maize, wheat, rice, and sorghum, and many forage crops. It is native to the warm, temperate tropical regions of India, Southeast Asia, and New Guinea. The plant is also grown for biofuel production, especially in Brazil, as the canes can be used directly to produce ethyl alcohol (ethanol).

Grown in tropical and subtropical regions, sugarcane is the world's largest crop by production quantity, with 1.8 billion Tonnes produced in 2017, with Brazil accounting for 40% of the world total. In 2012, the Food and Agriculture Organization estimated it was cultivated on about 26×10^6 ha (64×10^6 acres), in more than 90 countries. Sugarcane accounts for 79% of sugar produced globally (most of the rest is made from sugar beets). About 70% of the sugar produced comes from Saccharum officinarum and its hybrids. All sugarcane species can interbreed, and the major commercial cultivars are complex hybrids.

Sucrose (table sugar) is extracted from sugarcane in specialized mill factories. It is consumed directly in confectionery, used to sweeten beverages, as a preservative in jams and conserves, as a decorative finish for cakes and pâtisserie, as a raw material in the food industry, or fermented to produce ethanol. Products derived from fermentation of sugar include falernum, rum, and cachaça. In some regions, people use sugarcane reeds to make pens, mats, screens, and thatch. The young, unexpanded flower head of Saccharum edule (duruka) is eaten raw, steamed, or toasted, and prepared in various ways in Southeast Asia, including Fiji and certain island communities of Indonesia.

Sugarcane was an ancient crop of the Austronesian and Papuan people. It was introduced to Polynesia, Island Melanesia, and Madagascar in prehistoric times via Austronesian sailors. It was also introduced to southern China and India by Austronesian traders around 1200 to 1000 BC. The Persians and Greeks encountered the famous "reeds that produce honey without bees" in India between the sixth and fourth centuries BC. They adopted and then spread sugarcane agriculture. Merchants began to trade in sugar, which was considered a luxurious and expensive spice, from India. In the 18th century, sugarcane plantations began in the Caribbean, South American, Indian Ocean, and Pacific island nations. The need for sugar crop laborers became a major driver of large migrations, some people voluntarily accepting indentured servitude and others forcibly imported as slaves.