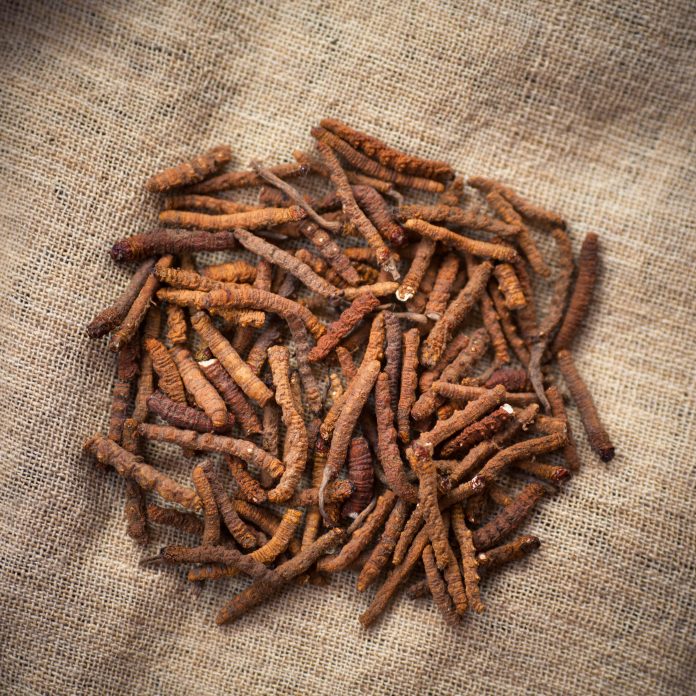 Fruiting body of O. sinensis यार्सागुम्बा in the Dolpo region of Nepal

Ophiocordyceps sinensis (formerly known as Cordyceps sinensis) is known in English colloquially as caterpillar fungus, or by its more prominent names yartsa gunbu (Tibetan:དབྱར་རྩྭ་དགུན་འབུ་, Wylie: dbyar rtswa dgun 'bu, literally "summer grass, winter worm"), or dōng chóng xià cǎo (Chinese: 冬蟲夏草) or Yarsha-gumba or Yarcha-gumba, यार्सागुम्बा (in Nepali language) or Keeda Jadi, or ရှီးပတီး (in Burmese language). It is an entomopathogenic fungus (a fungus that grows on insects) in the family Ophiocordycipitaceae. It is mainly found in the meadows above 3,500 meters (11,483 feet) on Tibetan Plateau in Southwest China and Himalayan regions of Bhutan and Nepal. It parasitizes larvae of ghost moths and produces a fruiting body which used to be valued as a herbal remedy and in traditional Chinese medicine. Caterpillar fungus contains the compound Cordycepin, an adenosine derivative. However, the fruiting bodies harvested in nature usually contain high amounts of arsenic and other heavy metals so they are potentially toxic and sales have been strictly regulated by the CFDA (China Food and Drug Administration) since 2016.

O. sinensis parasitizes the larvae of moths within the family Hepialidae, specifically genera found on the Tibetan Plateau and in the Himalayas, between elevations of 3000 m and 5000 m. The fungus germinates in the living larva, kills and mummifies it, and then a dark brown stalk-like fruiting body which is a few centimeters long emerges from the corpse and stands upright.

O. sinensis is classified as a medicinal mushroom, and its use has a long history in traditional Chinese medicine as well as traditional Tibetan medicine. The hand-collected, intact fungus-caterpillar body is valued by herbalists as medicine, and because of its cost, its use is also a status symbol.

The fruiting bodies of the fungus are not yet cultivated commercially, but the mycelium form can be cultivated in vitro. Overharvesting and overexploitation have led to the classification of O. sinensis as an endangered species in China. Additional research needs to be carried out in order to understand its morphology and growth habits for conservation and optimum utilization.