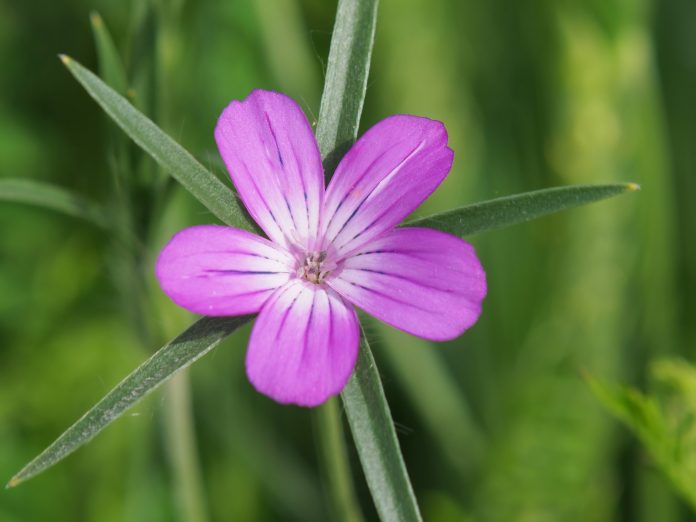 The corn cockle is a poisonous field weed that adorned field margins and fields almost everywhere until the 1960s. Modern weed control methods have made this plant very rare today, it is even almost extinct and is therefore on the red list.

The corn cockle was “Flower of the Year 2003” to commemorate the preservation of the cultural heritage of wild field herbs.

The corn cockle is native to Europe and was also exported to America. It used to grow preferentially on the edges of fields and in cereal fields.

The annual plant grows 30 to 100 cm high. The leaves are narrow, pointed and hairy. The purple to purple-red flowers appear between June and July and have a diameter of 3-5 cm. The flower has 5 petals and is surmounted by the leafy calyxes. The seeds develop from the flowers until autumn. The very poisonous warty seeds are black-brown and about 3 mm in size. The root is spindle-shaped and reaches up to 100 cm deep into the ground.

Attention! Highly toxic. Use only in prescribed ready-to-use preparations or homeopathically.

Boil the plant in wine, filter and bottle. Has a diuretic effect.

Boil the plant in vinegar, filter and bottle. A mouthwash is effective against toothache. (do not swallow!)

As a fresh herb

Chop the fresh herb and hold it in front of your mouth and nose and breathe through it. Works against cough and cold. An envelope with fresh herb has a haemostatic effect. An extract of fresh leaves is effective against acne and skin diseases.

The dry ripe seeds are used to make a remedy for paralysis and gastritis.

In times of famine the fresh leaves were boiled and eaten. It is not without danger because not all poisonous substances are destroyed by heat.

In the 1960s, the seeds were cleaned more and more effectively and weed killers were used to keep the grain fields and field edges free of weeds, so the widespread corn cockle almost completely disappeared. Only in recent years have there been renewed efforts to reintroduce the corn cockle into protected areas. The corn cockle is also finding its way into domestic gardens as an easy to care for ornamental plant.

Easy to cultivate in your own garden. Sowing in March or September on good but not fertilized soil. The undemanding plant likes sun and partial shade and tolerates dryness well.

The fresh leaves are harvested from June to October. The seeds in autumn.