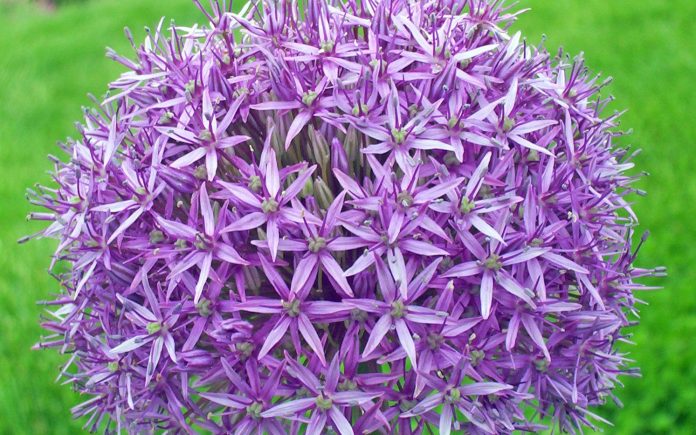 When the field is full of wild leek flowers in July and August, it bears beautiful purple spherical flowers. Wild leek is always found in sunny places. Its healing properties are similar to those of garlic and vegetable leek.

The wild leek is only rarely found. In July and August the wild leek shoots a long stem on which a spherical violet flower grows. Wild leek mainly bears these flowers, which then form seeds at the end of August. Some subspecies of wild leek have breeding bulbs instead of flowers. These bulbs grow to such a size that it is worth soaking them in vinegar.

Also the vegetable leek, which is a wet winter vegetable in Central Europe, is said to have been bred from the wild leek, as well as the Egyptian leek, also called curry.

The use of wild leek tubers is similar to that of garlic and onions. However, its effect is milder than the garlic effect. It is really good to eat wild leek as vegetable regularly, it is a pure source of youth. The wild leek juice can be used externally and internally. To do this, cut the bulb into small cubes, chop it up and press it through a cloth.

Contre les piqûres d'insectes
It is also possible to slice or mash the tubers of wild leek into a pulp and apply it to insect droppings. Even wasp and bee stings in places that tend to swell do not swell or swell much less and soon stop hurting.

Vaginite
For vaginal inflammation you can try the external application of fresh field garlic juice.

Alimentation
The tubers that grow to between two and six centimetres are the ones that are eaten. Their aroma is mildly garlic-like. They can be eaten raw or cooked, similar to onions or garlic. You can also eat the flowers. However, they are rather dry and are mainly suitable as a sparingly used spice. In any form, the consumption of wild leek stimulates the metabolism and helps against arteriosclerosis. Wild Leek Salt is also famous in cooking.

Wild leek is undemanding in terms of soil quality, but it loves full sun. Its flower stalk grows up to two metres high.

Allium ampeloprasum is a member of the onion genus Allium. The wild plant is commonly known as wild leek or broadleaf wild leek. Its native range is southern Europe to western Asia, but it is cultivated in many other places and has become naturalized in many countries.

Allium ampeloprasum is regarded as native to all the countries bordering on the Black, Adriatic, and Mediterranean Seas from Portugal to Egypt to Romania. In Russia and Ukraine, it is considered invasive except in Crimea, where it is native. It is also native to Ethiopia, Uzbekistan, Iran and Iraq. It is considered naturalized in the United Kingdom, Ireland, the Czech Republic, the Baltic States, Belarus, the Azores, Madeira, the Canary Islands, Armenia, Azerbaijan, Pakistan, China, Australia (all states except Queensland and Tasmania), Mexico, the Dominican Republic, Puerto Rico, Haiti, the United States (southeastern region plus California, New York State, Ohio and Illinois), Galápagos, and Argentina. In tidewater Virginia, where it is commonly known as the "Yorktown onion", it is protected by law in York County.

The species may have been introduced to Britain by prehistoric people, where its habitat consists of rocky places near the coast in south-west England and Wales.

Wild populations produce bulbs up to 3 cm across. Scapes are round in cross-section, each up to 180 cm tall, bearing an umbel of as many as 500 flowers. Flowers are urn-shaped, up to 6 mm across; tepals white, pink or red; anthers yellow or purple; pollen yellow.