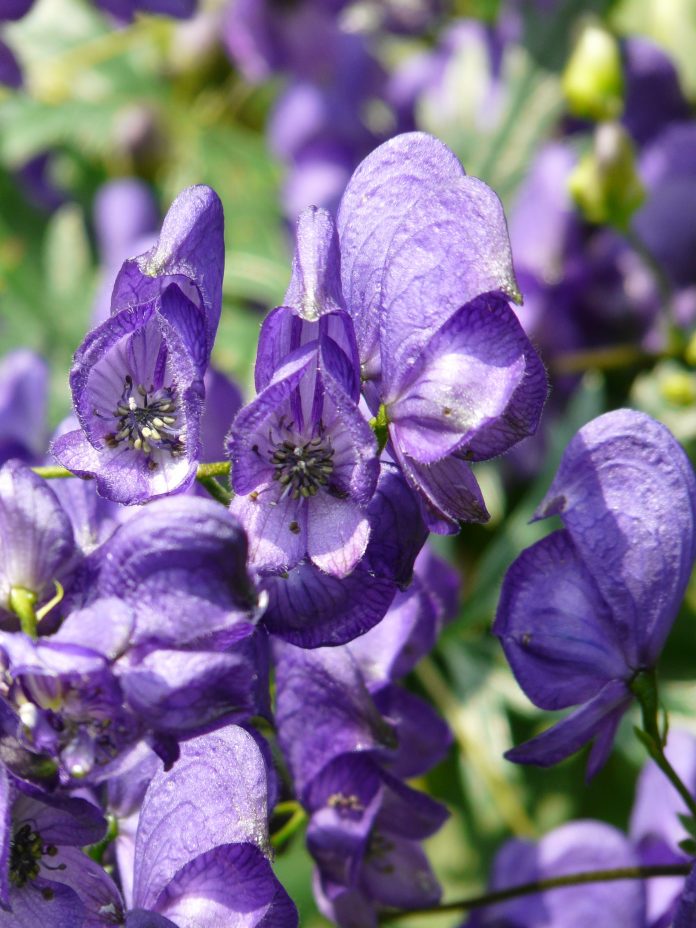 The Aconite originally comes from Siberia. In the course of the ice ages it has spread over Europe, Asia and America. It grows preferably in mountainous, cool areas, but can also be planted in gardens on the plains.

The perennial plant grows up to 1.50 metres high. In spring, the palmately divided, dark green leaves grow, which are silvery on the underside. In the course of the summer the flower stem grows high and bears the blue flowers, which grow in bunches of up to 50 cm high. The flowers have a very special appearance, which has earned the plant the name wolfsbane. The upper parts of the flowers look like a helmet.

In addition to the well-known blue Aconite, there is also the yellow Aconite (Aconitum vulparia) in Europe, which has fewer and smaller flowers in pale yellow. As a wild plant it is also a protected species.

Because of its extremely high poisonous content, Aconite may only be used in homeopathic dilution from D4 or in preparations prescribed by a doctor. From this dilution, Aconite (as Aconitum D4) can be used in the early stages of colds. In many cases the cold then will not really break out. Also against nerve pain, such as lumbago or sciatica, wolfsbane in homeopathic preparation can be helpful.

Diluted homeopathically, Aconite is a good remedy for emerging colds. If you feel a cold coming on, immediately take 10 drops of Aconitum D4 three to six times a day. This means that the cold is either no longer present or is milder than without wolfsbane.

The Aconite can also help against neuralgia. To do this, take 10 drops of Aconitum D6 or D12 three times a day.

One can also use the homeopathically diluted Aconite into oils for rubbing in. Add a few drops of lavender essential oil. Such an oil can then be rubbed into the painful areas several times a day.

As Aconite is the most poisonous plant in Europe, it should be treated with the necessary respect. All parts of Aconite are poisonous, especially the root and the seeds. Even five petals can lead to death in extreme cases! So even garden plants that you have planted yourself should never be used as a medicinal plant. Skin contact alone can lead to poisoning because the poisonous alkaloid aconitine is absorbed through the skin and mucous membranes.

Poisoning through the skin causes numbness in the areas of the skin that have come into contact with Aconite. Internal ingestion leads to feelings of cold, nervous excitement, nausea, cramps and disturbances of the heart rhythm. In severe cases paralysis occurs, which can lead to circulatory paralysis and respiratory arrest.

In the case of poisoning, vomiting should be induced immediately, if this does not already happen by itself. The administration of medicinal charcoal can also be helpful. The poisoned person should be taken to hospital immediately under emergency medical supervision. There he will need intensive medical treatment in case of severe poisoning. Depending on the dose, death may occur.