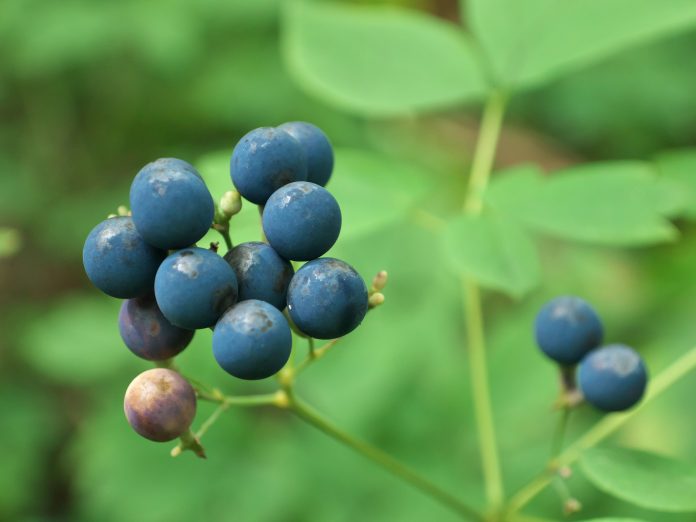 Blue cochosh is used to regulate menstrual flow, especially for suppressed menstruation. The Indians used it to induce labour, also for children’s colic and for cramps. Normally, it must be given in conjunction with other herbs suggested for the condition involved. Blue cohosh can be quite irritating to mucous surfaces and can lead to dermatitis on contact. Children have been poisoned from the berries.

Blue cohosh is a perennial plant found in eastern North America, near running streams, around swamps and in other moist areas. The fruit is a pea-sized, dark blue berry borne on a fleshy stock.

During pregnancy, it may be used whenever there’s a threat of miscarriage, and to reduce false labor pains. Used before childbirth, it’s reputed to alleviate pain and ease the birthing procedure. Blue cohosh’s anti-spasmodic properties enable it to be utilised in certain cases of asthma, colic, and nervous coughs. Blue cohosh can also be utilised to decrease pain in some cases of rheumatoid arthritis

Preparation and Dosage: Blue Cohosh ought to be used with medical supervision!

Traditionally, blue cohosh was used by Native Americans to induce labour. They would drink the tea for many weeks before childbirth to make the birth process swift and effortless. North American physicians in the Electic or Physiomedical herbal heritage used blue cohosh to counter restlessness and pain during pregnancy and to decrease labor pains.

When used together with black cohosh, this herb tends to improve mild uterine contractions like Braxton-Hicks contractions, strengthening the uterine muscles in preparation for birth. However, because of the increased regeneration, it shouldn’t be utilized until the ninth month of pregnancy.

For woman who suffer from irregular menstrual cycles, or those preparing for pregnancy, blue cohosh may be an important tool. Certain properties of blue cohosh have been proven to improve blood flow to the uterus and to decrease muscle spams, which may provide welcome relief to those victims of severe menstrual cramps as well as for people who suffer with arthritis.

Blue cohosh includes several essential minerals, including magnesium, potassium, iron, calcium, silicon and phosphorus. An active ingredient was isolated from the herb known as caulosaponin, a chemical that’s been shown to improve blood flow to the uterus and decrease uterine contractions. Blue cohosh has been shown to be an emmenagogue, so it will help to bring about menstruation, and to be an anti-spasmodic, or a chemical that reduces muscle spasms.

When you try to terminate a pregnancy through the use of herbs, you’re in essence poisoning yourself. In these scenarios, what women are doing is producing such high toxicity their own body is not able to sustain the pregnancy. If an herbal abortion is to operate, it’s in essence working because it’s poisoning the mother.