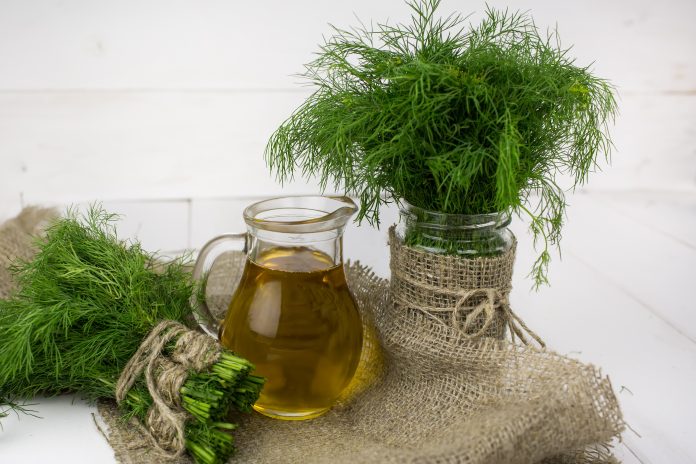 Dill is mostly well known as a seasoning herb for cucumbers and salads. However, like its brother, the fennel, it has numerous healing properties. Its milk-supporting property is particularly noteworthy. It also relieves flatulence in babies.

The entire plant has a strong dill smell. This is how it can be distinguished from other umbellifers. The stems of the annual dill grow to a height of up to one metre at flowering time. The thread-thin leaves are bluish and delicately double pinnate. The yellow flower umbels are large but airy. and very delicate.

Dill seeds can be used as tea or boiled in wine to combat flatulence, stomach cramps and to stimulate milk production. As a mild tea it also helps against flatulence in babies, similar to fennel.

When used as a sitz bath, the herb helps against uterine cramps, for example in painful menstruation.

As a warm compress in olive oil, dill helps against ulcers.

However, the most common use of dill is in the kitchen. It is used to season cucumbers, salads and sauces.

Dill (Anethum graveolens) is an annual herb in the celery family Apiaceae. It is the only species in the genus Anethum. Dill is grown widely in Eurasia, where its leaves and seeds are used as an herb or spice for flavouring food.