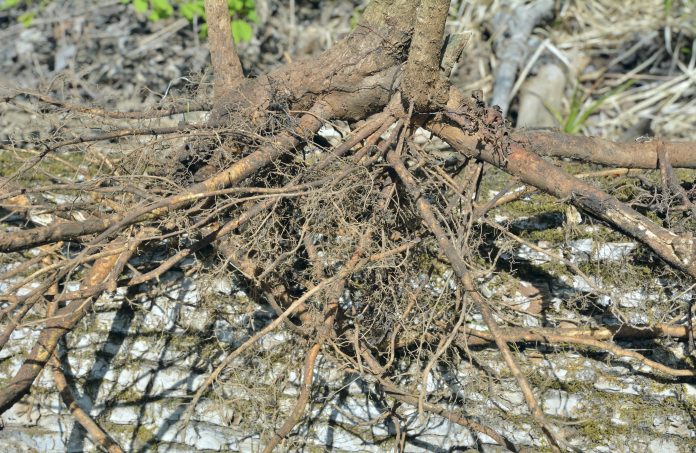 Eleuthero is a strengthening medicinal plant from the east of Russia. It is not without reason that it is also called Siberian ginseng, because it not only looks similar to Chinese ginseng, but also has similar strengthening effects, although the active ingredients are completely different.

Eleuthero belongs to the adaptogenic medicinal plants, which means it strengthens without damaging. This makes it wonderfully suitable for helping to regain strength after serious illnesses, or to support in old age or chronic illnesses. Eleuthero can also be used to strengthen the immune system, so that one can cope better with infectious diseases.

Eleuthero is native to northern latitudes. The perennial, deciduous plant usually grows 3 to 5 metres high, sometimes up to 7 metres. It is a small shrub that often climbs.

Eleuthero plants are barely branched and have spines on their stems. This is probably where the name “Spiny Panax” comes from. The oval leaves are usually grouped in five and look like a hand. The individual leaves are somewhat toothed and have a tip. The small yellow flowers are spherically arranged and sit on small stems.

The flowers develop into black, round fruits that grow close together in a spherical shape. The fruits are reminiscent of ivy fruits, but also of the fruits of ginseng. Therefore the plant is probably called Siberian ginseng or Panax, and also because the effect of Eleuthero is similar to that of ginseng. After all, all three plants, taiga root, ivy and ginseng belong to the aralia plant family.

The Siberian Ginseng can be used either as a tincture or as powder among others. The most common way of using it is traditionally the tincture. However, the use as capsules (powder) is becoming more and more popular because many medicinal plants are nowadays taken as capsules.

To make a Eleuthero tincture yourself, pour double grain or spirit of wine in a screw cap jar until all parts of the plant are covered and leave the mixture closed for 2 to 6 weeks. Then strain and pour into a dark bottle. Take 10-50 drops of this tincture one to three times a day. If the tincture is too concentrated, you can dilute it with water.

The recommended daily dose for the powder of Eleuthero is 2 – 3 g daily. If you have capsules containing 500 mg each, this means that you should take 4 to 6 capsules daily. The capsules are best taken throughout the day (2 – 3 intakes daily). Drink plenty of liquid to help you swallow the capsules.

Eleuthero belongs to the group of adaptogens, which also includes ginseng, ashwagandha and amla. Adaptogenic medicinal plants, are medicinal plants that generally strengthen without harm. The Taiga root has been scientifically examined by official committees for phytotherapy, e.g. Commission E and has been declared effective.

With Taiga root it has been observed that the number and activity of T-lymphocytes is increased. This strengthens the immune system and the body can better fight off infections. Taiga root is therefore recommended as prophylaxis against viral infections. In addition, Taiga root reduces the release of adrenaline. This means that Taiga root can be used against restlessness and nervousness. It counteracts the negative consequences of stress.

Note:
To be on the safe side, people with very high blood pressure, heart attack or high fever should not use Taiga root, even if concrete problems when using Taiga root in these cases are not really known.

It has long been known in its Russian homeland as a medicinal plant. At the Olympics in Moscow, Russian athletes took Siberian Ginseng to strengthen themselves. Since then the Taiga root has been very popular throughout Russia. In the meantime, taiga root is also used as a medicinal plant in Europe. Taiga root can also be found in Siberia, in the catchment area of the Amur River, in northeast China, e.g. Manchuria, North Korea and on the Japanese island of Hokkaido.

Since the Siberian Ginseng is not native to Central Europe, it is normally not possible to collect or harvest it in this country. Only if it have been grown in the garden, a harvest is possible. In autumn the roots of fully grown plants are dug out. Afterwards the roots are cleaned and dried in the air.

Eleutherococcus senticosus is a species of small, woody shrub in the family Araliaceae native to Northeastern Asia. It may be colloquially called devil's bush, Siberian ginseng, eleuthero, ciwujia, Devil's shrub, shigoka, touch-me-not, wild pepper, or kan jang. E. senticosus has a history of use in folklore and traditional Chinese medicine. Root extracts of E. senticosus are sold as a dietary supplement or cosmetic, usually under the name Siberian ginseng.