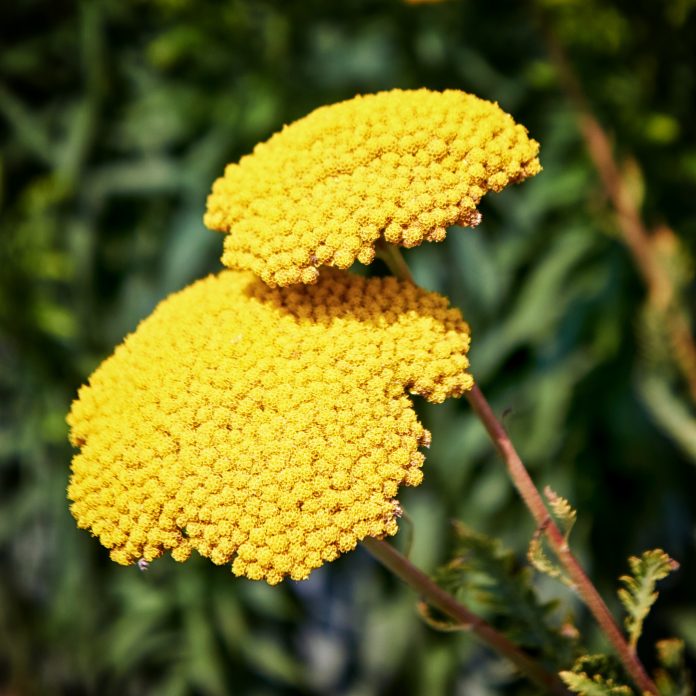 At first glance, the Fernleaf yarrow looks like the rain fern. Its scent also resembles that of the rain fern, but the Fernleaf Yarrow smells softer and friendlier. This plant is not found wild in our country, but because of its beauty it is often found in gardens, from which it sometimes escapes.

The Fernleaf Yarrow is native to the Caucasus. In Central Europe it is often planted in gardens as an ornamental plant, because it looks very decorative with its yellow flowers. The Fernleaf Yarrow grows preferably in sunny places and tolerates both loamy and sandy soils. The perennial plant grows up to 120 centimetres high.

In spring, the root initially sprouts finely feathery leaves. A leaf rosette then grows near the ground. The leaves are strongly pinnate, but somewhat less fine than those of the native yarrow. From June the flower stalk grows upwards. It has leaves similar to those of the leaf rosette. The yellow flowers appear between June and September. They stand in false umbels, but are composite flowers, just like those of their relatives the yarrow and the rain fern. The seeds develop from the golden yellow flowers until autumn.

Other names
Yarrow, Milfoil or Nosebleed.

Yarrow can be used either as infusion or as tincture. To make a Fernleaf Yarrow tea, pour a cup of boiling water over one or two teaspoons of Fernleaf Yarrow and let it steep for ten minutes. Then strain and drink in small sips. Drink one to three cups of this tea daily.

To be on the safe side, you should not use Fernleaf Yarrow in large quantities and not regularly for long periods of time.

Yarrow can be used internally, as tea or tincture against women’s diseases. In addition, Fernleaf Yarrow helps against indigestion.

If you get seeds of the Fernleaf Yarrow, you can also sow it in spring, preferably in small pots. As soon as the young plants have grown up a little, you can put them outdoors. Fully grown plants can also be propagated by dividing the rootstocks.

In the flowering period, cut off the whole flowering herb about two hand widths above the ground. Then tie small bundles of the plants and hang them in a dry, shady place with the flowers facing down. When the plants are dry, hang them up, cut them up (preferably with scissors) and store them in a cool, dry place away from light.