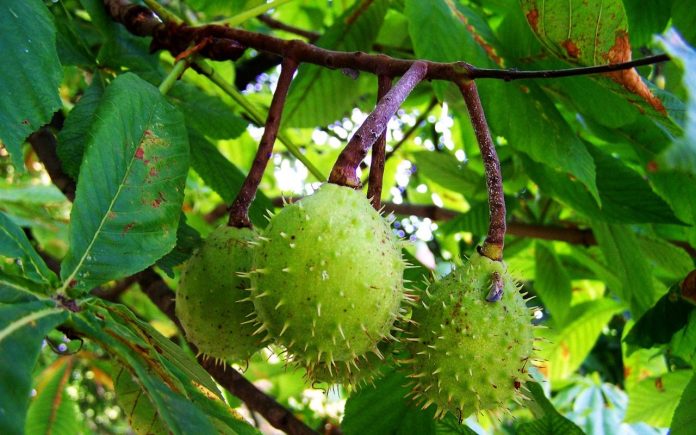 The horse chestnut is a large tree that grows in parks and along roads, where it plays a dominant role due to its size. Children usually know the locations of chestnut trees very well, because in autumn they find the reddish-brown shiny chestnuts there, which feel wonderfully smooth and are good to use as handicraft material. Which means that most people are familiar with the horse chestnut from early childhood.

But above all, the horse chestnut tree is honoured because it has been an important medicinal plant for centuries and its active ingredients have been thoroughly researched. It has many different curative effects, and the most remarkable one is the effect on the vascular system. It is particularly useful against all venous diseases because its active ingredients seal the walls of the veins. Horse chestnut is suitable for both internal and external use in the treatment of varicose veins, haemorrhoids, swollen feet and arteriosclerosis. Its effects against calf cramps and heavy legs are also important.

The horse chestnut tree originally comes from India, Central Asia and South-East Europe. However, since it not only looks beautiful, especially in flower, but also tolerates dirty air and exhaust fumes well, it has spread widely as an urban tree in Europe. The tree grows up to 30 m high. It has large leaves, which are composed of seven parts finger-like.

In May the horse chestnut blossoms with impressively splendid flowers. They stand upright on the branches like thick candles and consist of many partial flowers. In autumn the chestnut fruits grow from them, which sit in a prickly green shell. The fruits (seeds) are about three to five centimetres in size and roundish. They have a shiny red-brown colour. They feel pleasantly smooth.

Due to its high saponin content, horse chestnut parts should not be taken in excessive quantities, but always in the correct dosage.

The reddish-brown seeds contain a lot of saponin as the most important active substance. But tanning agents, tannic acids and some special active substances are also contained in the seeds of the horse chestnut.

The dried and cut seeds can be taken as tea or tincture and used to strengthen the blood vessels. Horse chestnut tincture and tea not only help against vein weakness, but can also strengthen the arteries and remove deposits. In addition, the fine capillaries are stimulated to absorb more tissue fluid from the surrounding tissue and transport it to the heart, which for example makes swollen ankles swell.

A part of being ingested, horse chestnut seeds are often processed into ointments and creams with which the lower legs can be rubbed to combat varicose veins and swelling. In addition to the effect on the blood vessels, horse chestnut seeds have a strengthening and expectorant effect, which makes them a remedy for coughs. The seeds also have an analgesic effect, which is why they can be used against rheumatic and neuralgic pain. Another field of application is catarrh of the digestive organs and diarrhoea. In addition to teas and tinctures, a knife point can be taken twice a day with the peeled, dried and powdered seeds.

The flowers of the horse chestnut can be used similarly to the seeds. A flowers tea also works particularly well against coughs. The flowers can also be used to prepare a tincture that can be used as an embrocation against rheumatic pain. The Bach flowers Chestnut Bud, White Chestnut and Red Chestnut are made from the buds or flowers.

The leaves can be drunk as tea and used against fever and whooping cough. They also have a strengthening, blood circulation-promoting and draining effect.

The bark, when ingested internally, has an anti-inflammatory, astringent, diuretic, antipyretic, analgesic, vasoconstrictive and strengthening effect. It can therefore be taken for feverish colds and inflammations of the digestive tract.

The bud is used as Bach Flower remedy for the ones who don’t learn from experiences and always make the same mistakes.

All parts of horse chesnut can be used in different ways:

As a wash, bath or cream, the bark has an effect on the one hand, like the other parts of the horse chestnut, against vein problems, but on the other hand it also has a skin healing effect against eczema, ulcers and other skin problems. Even against lupus erythematosus, folk medicine uses ablutions with a bark decoction.

The bark contains the glycoside aesculin, which is fluorescent. If you make a cold extract with the bark of young chestnut branches, you can see how the liquid glows. The aesculin binds ultraviolet light and is therefore used as a sunscreen. It also stimulates blood circulation and metabolism.

Horse chestnuts are considered inedible, but this is only partly true. Due to their high saponin content (8% to 25%) they are not beneficial to health in large quantities, but you can wash out the saponins and then you can eat the horse chestnut seeds.

To do this, the seeds are lightly roasted at low heat, peeled and cut into thin slices. These slices are then soaked for several days in constantly renewed water (or hung in a clean stream = traditional method of the North American Indians). Afterwards the fruits can be cooked and eaten. They contain about 10% protein, 5% fat and 35% starch.

If you pour boiling water over chopped horse chestnuts, the water becomes soapy. This water can be used to wash the body and clothes.

After the Ice Age had driven the horse chestnut out of Central Europe, it only returned to Central and Western Europe a few hundred years ago with the Ottomans. The Ottomans carried chestnuts with them as horse feed and every now and then one fell to the ground and developed into a tree. The randomly sown trees obviously pleased many people, because over time the large growing horse chestnut became a popular tree in large parks and as a dominant greenery in cities.

In 1576 the horse chestnut was officially planted in Viennese gardens for the first time. Carolus Clusius, the imperial director of the botanical gardens in Vienna, advocated these plantations. The French Sun King Louis XIV loved the massive chestnut so much that he had it planted everywhere, especially as an avenue and in his palace gardens. This fashion continued and therefore you can still find numerous chestnut trees everywhere.

Chestnut trees were especially popular above the vaulted cellars of breweries, because their roots are not very deep and the lush crowns provide plenty of cool shade. This also kept the beer cellars cool, which improved the quality of the beer. This is why the typical tree in beer gardens is the chestnut.

Today, numerous vein ointments containing horse-chestnut extracts for the treatment of varicose veins are available on the market. In 2005, the horse chestnut was the tree of the year, and in 2008, the medicinal plant of the year.