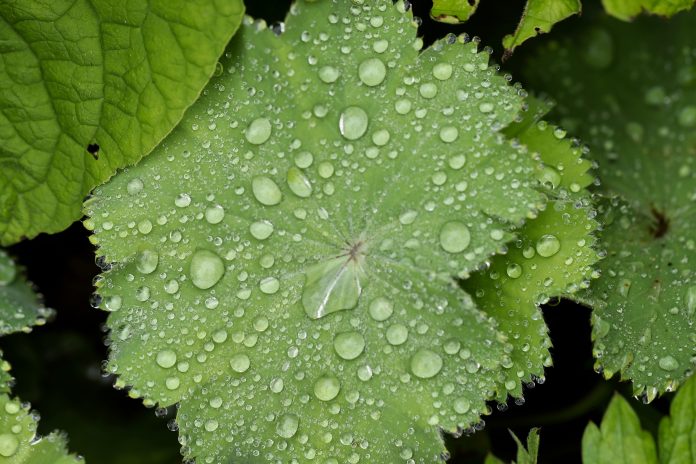 The lady’s mantle is a delicate plant with calyx-like lobed leaves in which dew drops collect in the morning. Its flowers are pale yellow umbelliferous panicles.

As the name suggests, the lady’s mantle has proven its worth as a medicinal plant, mainly in gynaecology, but it can also be helpful in other areas. There is hardly any area of the body on which the lady’s mantle cannot have a beneficial effect.

The lady’s mantle is found almost worldwide. It grows preferentially on meadows, in light woods and bushes. If a location pleases the lady’s mantle well, it often forms whole carpets, elsewhere it also occurs singly.

The perennial root sprouts several stems in spring, on which folded leaves with seven to eleven lobes grow. The edges of the leaves are serrated. Dew drops often collect in the middle of the leaves, which is a particularly typical characteristic of the lady’s mantle. From the middle of some leaves emerge stems, at the end of which the small, yellow flowers grow in umbels from May onwards.

In the mountains you can find among other things the silver mantle, a plant species that resembles the lady’s mantle. It is also called the Alpine Lady’s Mantle. The healing effect is similar to that of the normal lady’s mantle.

Traditionally, the main area of application of the lady’s mantle is gynaecology. This is probably due to its plant hormones, which are similar to female progesterone. Thus, the lady’s mantle can compensate for deficiencies that lead to premenstrual disorders and menopausal symptoms. In addition, the lady’s mantle herb has a relaxing effect, which is also very beneficial for the uterus.

Drunk as tea, it relieves almost all kinds of women’s complaints, be it period cramps, premenstrual syndrome or menopausal complaints. The lady’s mantle can also be helpful during and after giving birth. When the baby is born, lady’s mantle tea promotes milk production. As a sitz bath, lady’s mantle tea can help against white flow.

The lady’s mantle can not only help with women’s complaints, but also with many other health problems. Women’s mantle tea relieves complaints of the respiratory organs, such as cough, cold and sniffles. The lady’s mantle also aids digestion and gently balances it. A weak heart is strengthened and the blood vessels become more elastic. The effect on the nervous system can relieve headaches and insomnia.

Used externally, lady’s mantle tea can be used as a bath, compress or wash against all kinds of skin complaints. Baths can be used against ulcers, washes against eczema and to melt festering boils.