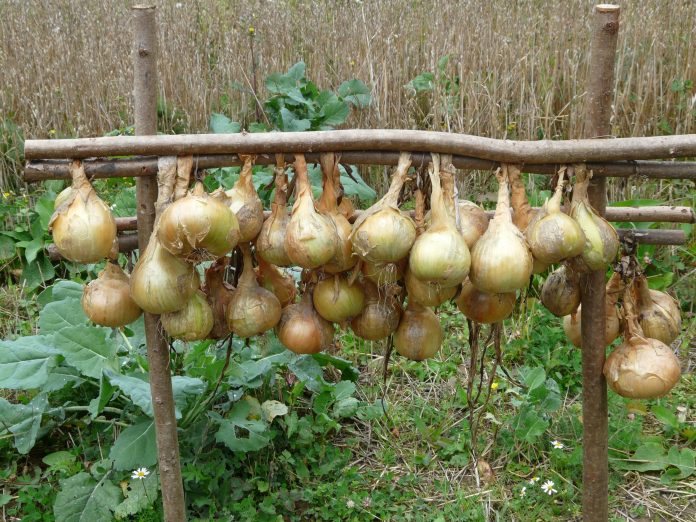 In every supermarket you can buy it for a ridiculously low price, and because it smells a bit coarse, the onion is considered to be a rather unfine everyday vegetable that simply belongs to the menu.

But the onion is bursting with healing powers. The onion has a remedy for almost every ailment. It not only keeps the vascular system young, but also relieves coughs, digestive problems, inflammations of all kinds and even hair loss. There is hardly a better medicine chest that is readily available than a bag of onions in the pantry. So you always have a remedy at home.

Originally, the bulb probably comes from India. But it was already known in Europe in the Middle Ages. Nowadays it is an indispensable part of the garden and one of the most important vegetables that you can buy cheaply everywhere.

When growing onions, you can either stick small mother onions into the ground or you can also sow them. The method with the bulbs will produce thicker bulbs more quickly. The bulb stems are also the leaves. They are round, hollow and fleshy and grow about half a meter high. You can eat these so-called chottings as fresh green vegetables. But if you cut off too many of them, the growth of the bulb is impaired.

In midsummer one of the stems becomes particularly thick and long and forms a bud. If you want to harvest the bulb, you must cut off these flower stems. But if you want to harvest seed or enjoy a beautiful flower, you can leave the flower stalk. At first the bud is surrounded by a shell that gradually peels away and makes way for a spherical flower.

There are many ways to use onions as a remedy, but eating onions is probably the most common.

If you have been stung by an insect, e.g. wasp, you can cut open an onion and rub it into the sting. As soon as the cut edge of the onion is dry, press the onion together until new juice appears. After about five minutes the pain should subside. In most cases, there will be no swelling of the bite later.

For ear infections, chop the onion finely and wrap it in a thin cotton cloth. A tube bandage or a tea filter made of thin filter paper can also be used for wrapping. The onion pack is heated, for example with steam. The heated onion pack is placed on the aching ear. It is best to fix it with a scarf, cap or headband and leave it to work for a good half hour. Then rest for a while. Repeat this procedure three times a day. Such an onion sac can also be applied to the bladder area to relieve pain when urinating.

For vaginal catarrh, uterine inflammation and ovarian inflammation, an onion tampon can be prepared. To do this, grate an onion finely into puree and put this mixture in gauze. This tampon-like packet is inserted into the vagina and left to work for five hours. Repeat two to three times a day. You should feel an improvement after just one day.

It is generally beneficial to health, especially for the blood vessels and thus also for the cardiovascular system and blood pressure, to include the onion raw in the diet. In the case of diabetes, the onion helps to lower blood sugar levels and therefore belongs regularly on the table of every diabetic.

For many dishes, fried or steamed onions are standard. But onions are rarely prepared as a vegetable in their own right. But they taste very tender and sweet.

You can either simply boil them in water without peeling. Afterwards they literally slip out of their skins. They taste very delicious with potatoes in their skin and curd cheese. Or you can steam them with some vegetable oil. If you like it, add a shot of wine as soon as the onions are slightly glassy. Season with salt, pepper and paprika, optionally with thyme and after a good twenty minutes a delicious vegetable is ready.

Syrup and honey from onions help against coughing and mucus in the respiratory tract.

Allium cepa is a very common homeopathy products used against colds and coughts.