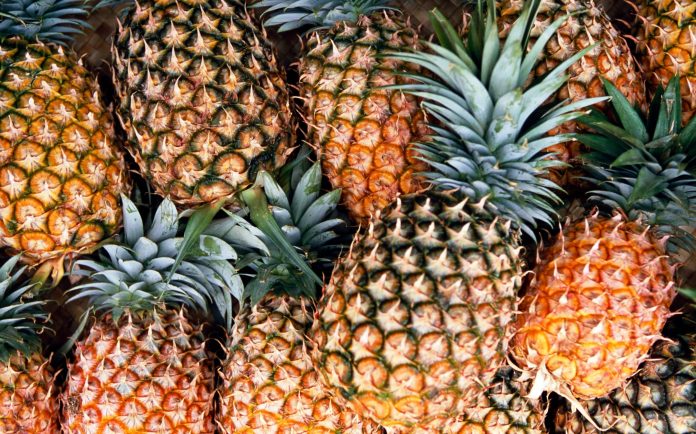 The pineapple originally comes from Central and South America, but is now cultivated around the globe in the tropics. The golden yellow fruit of the pineapple contains many vitamins, minerals and enzymes.

Its juice and the enjoyment of the fruit flesh promotes metabolism. The bromelain contained in the pineapple is particularly beneficial for the digestion of proteins. The pineapple can also lower blood pressure and prevent arteriosclerosis.

The pineapple (Ananas comosus) is a tropical plant with an edible fruit and the most economically significant plant in the family Bromeliaceae. The pineapple is indigenous to South America, where it has been cultivated for many centuries. The introduction of the pineapple to Europe in the 17th century made it a significant cultural icon of luxury. Since the 1820s, pineapple has been commercially grown in greenhouses and many tropical plantations. Further, it is the third most important tropical fruit in world production. In the 20th century, Hawaii was a dominant producer of pineapples, especially for the US; however, by 2016, Costa Rica, Brazil, and the Philippines accounted for nearly one-third of the world's production of pineapples.

Pineapples grow as a small shrub; the individual flowers of the unpollinated plant fuse to form a multiple fruit. The plant is normally propagated from the offset produced at the top of the fruit, or from a side shoot, and typically mature within a year.

From Middle English pinappel (“pinecone”, literally “pine-apple/pine-fruit”), equivalent to pine +‎ apple. Later applied to the fruit of the pineapple plant due to its resemblance to a pinecone. Compare the post-Classical Latin pomum pini, the Old French pume de pin, the Middle French and French pomme de pin, the Middle Dutch and Dutch pĳnappel