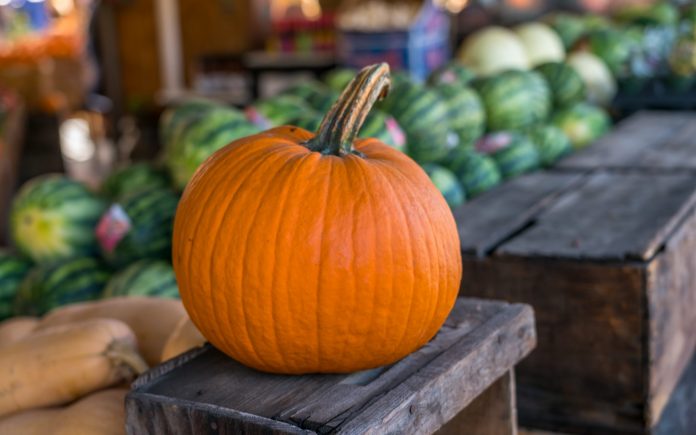 Growing your own pumpkins is truly good fun. Watching the vines grow, flowers blossom and tiny little pumpkins form is really exciting. They need between 6 to 8 hours of sun light every day, rich soil improved with compost and a great deal of space or something to climb on.

1. Pumpkins
2. Soil
3. Siting your own Pumpkin
4. Propagating Pumpkins
5. Favourable conditions
6. Fertilising the Ovary
7. Wheather Factor
8. Why is not my Pumpkin producing Fruit?
9. Harvesting and storing

They are incredibly easy to grow and can erupted from your compost, with no help from you. The number, well who knows, it depends on what you bought in the supermarket and what seeds moved into the compost heap. They’ve some querky traits and it can be quite frustating when the blossom is very healthy and you only find male flowers. In addition, it can be extremely devasting if you believe you’re going to find a pumpkin to find it’s dropped off. Why you ask yourself, what happened, what do I do wrong? My answer is probably nothing. Pumpkins have a reputation for not producing fruit.

Pumpkins belong to the genus Cucurbita and the family Cucurbitaceae including zucchini, watermelon, rock melon, squash, cucumbers and gourds. The term pumpkin origninates in the word”pepon” which is Greek for”large melon” It’s categorized as a vine and require a great deal of space to grow. Pumpkins are monoecious which means having both male and female flowers on the same plant, so you just need one plant to produce fruit.

Pumpkins like a soil pH bwtween 6 to 7.2. If your soil is on the acidic side then it is wise to add some gardeners lime and if it’s on the high side – alkaline – then you can reduce it by applying sulphur. To prepare the soil for pumpkins, I recommend you incorporate a great deal of compost and cow or sheep manure. A good handful of bone and blood and potash will be beneficial. Pumpkins are an annual harvest and desire a rich organic soil, so that they can grow rapidly and produce fruit until the winter cold sets in. The soil also has to drain well and if your soil is clay, then I advise you to create a mound with a good quality loam. This will raise up their roots over the clay and poor drainage.

Siting your own Pumpkin

Pumpkins require a good deal of space and can smoother other crops if left unattended. Now for those who have a little garden and don’t want to be invaded by the trifid plants then I suggest growing them up alongside a fence or shed or placing in some lattice and coaching that the tendrils that. The fantastic point about linking them up is that it receives the fruit off the floor away from pests such as slugs and snails and diseases like mildew. If space is not a issue, then just let them wander. You may find you have a floating sea of pumpkin leaves enveloping your own garden. If they get into any mischief, simply prune them back, it will not hurt them!

The ideal time to plant pumpkin seeds is in spring, once the soil and air temperature is warming up. If starting off them in the vegetable patch, the soil temperature has to be at least 20C for germination and the air temperature 22C. You can start them off in pots in a hot house if you prefer, but the garden dirt still has to be over 20C when you plant them out. They do not like the cold or frost.

When you plant the seed directly into the garden, create a mound about 1/2 metre wide and plant 3-4 seeds around 4-5cm deep. Depending on the heat of the soil they ought to sprout within about 7-10 days. When the baby seedlings have between 4-6 leaves, pinch out the weakest plants, leaving the most powerful ones. If you do not pinch out the weak ones, the mound will be bloated and not one of the pumpkins will flourish. If you don’t wish to dismiss them, replant them someplace else in the skillet.

Pumpkins are grown in summer, need between 70-120 days until they are ready to harvest and that’s usually in early to mid fall. Pumpkins like do not like scorching temperatures and will close down and stop growing. They are shallow rooted, wilt easily and that’s the reason it’s important to prepare the soil with plenty ofcompost and animal manure to help increase the water holding capacity of the soil. If the soil retains its water, then it’s available to the plant to replace the moisture it’s losing through its leaves. Pumpkins don’t like being water worried and do not like the flood and famine watering regime. It may cause them to divide. They enjoy fine even watering and also the best time is at the morning. If you water at night and the leaves become moist, powdery mildew can place in. Pumpkins do not like wind and have to be protected from it. Heat and strong winds can lead to woodiness that makes the pumpkin quite unpleasant to eat. Additionally it is believed that a lot of wind can lead to scarring on the flesh.

The vine takes about ten weeks before it begins producing flowers and the men are first. They’re on long thin stems (called pedicels) and you will find heaps more of them than females. If you peak in the male flower you’ll discover a long thin strucutre called the stamen which produces the pollen. The female flowers have a shorter pedicel and sit closer to the vine. If you peak in the female blossom you will notice the stigma that’s where the pollen is obtained. The ovary is in the bottom of the petals and is where the seeds grow.

The flowers only open for 1 day; just before sunrise, the flower petals begin to unfurl and open for a 4 hour period. By mid-day they are starting to gradually close and by dusk they’ve shut permanently. Pumpkins are pollinated by insects, particularly honey and native bees, so it’s important to encourage them into your garden. It’s typical for the female flowers ovary to swell and begin to resemble a pumpkin is forming. But catastrophe, it turns brown and drops off. This happens because it has not been fertilised as a result of lack of bees. There are several things you can do to promote them:

Now, if the weather has been beastly either too hot or too cold and you notice that there aren’t many bees buzzying around, you can try fertilising them yourself. There are two methods, hand pollinating with the male blossom or using a tooth brush. To hand pollinate, select male blossoms, eliminate petals then dab on the pollen onto the stigma of female flowers. I tried the tooth bush method once, where you lightly bush the toothbush over the stamen, then softly bush it on the blot but it did not work. It is best to try the first method.

To save seed from harvested pumpkins, store it for a month, then scope out the fleshwash it away and dry the seeds on paper towel. Then store them in a clean dry glass jar in a cool dry place away from sunlight. Additionally it is advisable to label the jar with the wide variety of date and pumpkin. I guarantee if you do not you’ll have forgotten in a years time, what sort it is.

Pumpkins are notorius for cross legged with one another so to guarantee true to type, save seed from one variety grown in isolation. You might want to hand pollinate it, to ensure there’s no contamination of pollen.

Why is not my Pumpkin producing Fruit?

I said previously that pumkpins are notorius for not producing fruit and there are lots of reasons why.

You will find the normal pests such as slugs and snails that attack the leaves. You may try picking them off by hand, particularly after rain or utilize a snail trap of beer in a glass jar 1/2 sunken into the floor. They creep , get drunk and drown. There’s also the finely chopped egg shells circle, that you place around each plant that they hate crawling over. There’s a brand new product for pots, which is a copper strip which you attach around the kettle. There’s also a spray to repel them but I have not tried it.

If you’re having trouble with caterpillars, then I suggest using a natural spray named Dipel that the active ingredient is Bacillus thuringiensis. It won’t hurt you, your children, pets or other beneficial insects. Longlife pyrethrum is also great for sap sucking insects like white fly and aphids, but also kills caterpillars.

In reference to woman birds you will find the good one and the bad ones. The bad ones are called the 28 seen ones and they eat the leaves, so you will need to watch out for them and pick them off by hand.

The disease pumpkins are most likely too are powdery mildew and it might spread quickly in hot humid conditions. To try to control this disease it is possible to use cows milk, sprayed on the leaves every 2 weeks using a solution of 1 part cows milk into ten parts water. The fantastic woman birds identified by black and yellow bands and they consume the mould, so don’t kill them. I also recommend watering in the morning, no overhead watering but watering at ground level to prevent the spores being splashed up on the leaves.

The best portion of growing pumpkins, is harvesting them. You’ve got watch them develop, nutured them, no pests or diseases have got them and then you think, I do not know when to harvest them. It takes between 3-4 months, they ought to be a wonderful color, sound hallow when you knock them on and skin should be tough and not reveal any indentations if you push you finger nails into them. It’s actually important that you cut them off with 5-10cm of the stem attached. This prevents mound entering into the pumpkin and helps to span their storage life.

Picking the ideal storage space is crucial if you would like pumpkin out of season. It has to be well ventilated, no direct sun light and trendy. Additionally, it needs to dry rather than damp. The pumpkin also should be healthy, no breaks in the flesh and there should be no indication of mould. If there is, then eat it straight away, it won’t save.

Final tip to help them grow healthy and strong is to nourish them fortnightly with a potash and liquid manure beverage. Can be cow, sheep manure or pig liquid.

For pumpkins to grow successfully, they have to have rich organic soil, maintain full sun, decent weather and regular moisture. If you follow these basic guidelines and the weather is constant neither too hot or too cold, you’ll have lovely healthful pumpkins that you’ll have the ability to shop and eat and eat as it’s out of season.