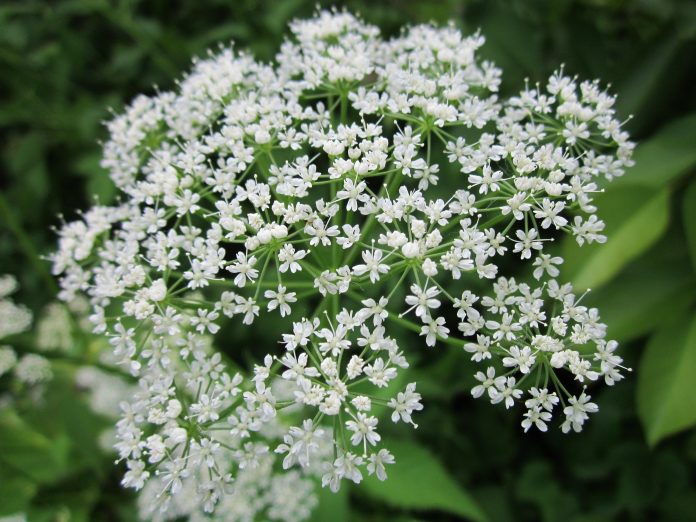 For most garden owners, goutweed is an annoying weed that is so stubborn that you will never get rid of it. However, in the past, goutweed was highly valued in folk medicine for treating gout and rheumatism and to stimulate the urinary organs and metabolism. But since we can eat the goutweed as a wild vegetable, sometimes we are glad to have so much of it!

The goutweed is native to all of Europe. It prefers to grow in alluvial forests, hedges and gardens. The perennial perennial plant grows to a height of between 30 and 90 centimetres.

The stem is hollow and angular. The leaves are double tridentate. The umbels with white flowers appear between June and August. The flowering umbel is 15-25 radiating. The seeds develop from the goutweed flowers until autumn. The egg-shaped and smooth fruits are about 3-4 mm long. The white roots are slightly poisonous (falcarindiol) and even from small root pieces a new plant can grow. The roots form wide runners, which ensure fast and safe spreading.

2 tablespoons per 250 ml of water. Pour the hot water over the cabbage, leave to stand for 5 minutes and strain. The tea from the dried herb helps against gout and rheumatism. For a spring cure you can use the fresh shoots in the same quantity instead of the dried herb.

The freshly crushed herb is applied as a compress to the affected area of the body against gout and rheumatism. The crushed herb is practical during hikes against insect bites.

Preparation like the tea. As a sitting bath against hemorrhoids.

As a salad or spinach as a detoxification cure in spring.

A 10-day spring regimen. Squeeze juice from the fresh shoots and dilute 1:5 with mineral water or buttermilk. On the first day 1 tablespoon, on the second 2 tablespoons and so on. Should stimulate the metabolism, purify and detoxify.

Caution! Too much extract results in diarrhoea!

The fresh flowering plant is processed. Also against rheumatism and gout.

Goutweed were eaten as wild vegetables as early as the Stone Age, it was used as a salad or spinach as a spring cure. The name (Aegopodium) is derived from the Greek words for goat and foot, because of the petals which resemble a goat’s foot. According to the medieval theory of signatures, goutweed is therefore suitable for the treatment of gout in feet. As an ingredient in soups, goutweed was a valued delicacy among some royal families.

The cultivation in your own garden should be considered very carefully. In case of unfavourable wind or missing rhizome barrier (against the roots) it is only a matter of time until the neighbour also has goutweed in his garden. If you want to get rid of the goutweed, the only thing that usually helps is to move it away.

The cultivation of goutweed on the other hand is simple: Just put the seed (in the still cold spring) or the root pieces (any time) into the soil and keep the soil moist. The location should be shady or semi-shady. It is best to grow in large pots and prevent the seed from ripening and spreading throughout the garden.

Pick the aromatic and slightly bitter fresh shoots and young leaves in spring and prepare them like spinach or salad. The older leaves are suitable as a substitute for parsley in soups, vegetable dishes and casseroles. The ripe seeds are suitable as a spice.

For drying, collect the herb just before flowering and hang the plant in bundles in a shady and airy place. Store the dried herb in cloth or paper bags.

gout +‎ weed, from having formerly been used to treat gout.