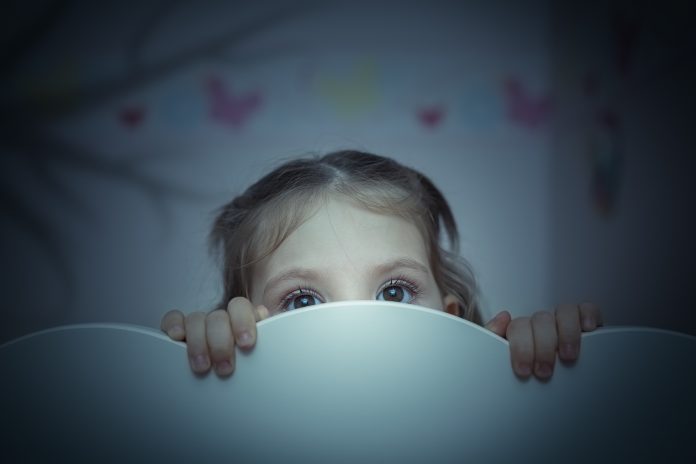 When my brother was young, he had a fear of monsters hiding in the dark at night. To fight his fear, he would check that all doors and windows in the house were locked, turn on the lights in each room and check under the beds and in the wardrobes for ghouls and monsters, switch off his light and then launch himself on his bed against the door. It seems funny now when I look back at it, but at the moment, this procedure was deadly serious. Many kids believed there were things under the mattress that could snatch in our small legs and pull us into darkness before we could scream for support.

As a youngster, my personal fear was of witches coming into my room to catch me with their long, scratchy claws and bite me with their teeth. I often dreamed that they would grab me, cut me up and use me in one of the nasty potions. (I can only assume that an overdose of “The Brothers Grimm” could have contributed considerably to my frightening dreams ). I’d often wake up and see the silhouettes of the witches in the dark following my fantasy. It wasn’t till I was eight years old I was able to face my fears. After telling myself that what I was seeing was only shadow and a shadow was no danger to me, I remember taking a deep breath, shifting my legs off my bed, and purposely walking through the shadows I saw before me. This simple activity gave me the power and clarity in order to distinguish between what was real and what was not. This was a truth that no adult could instruct me, but one which I learned for myself.

Recently, my small daughter started coming to my bedroom at night and asking to be tucked back into bed. I didn’t understand at the moment, (probably in the haze of missing sleep), that something was amiss. After she awakened a few times, I realised that there might be a problem. Being a reticent child, I had to find some way to make her comfy and confident enough that she could open up about what was bothering her. One foot soak and massage session afterwards, she said that she’d been having dreams of a robber attempting to break into her room at night. It frightened her to the point that she would hear a sound and run for cover. She spoke about how she felt and we explored how this fear may have originated. When it came time to develop a strategy to keep her safe, we looked at the choices available to us. By tackling the problem together, she felt secure and in control of this situation. I’m delighted to report that she’s now far more confident in her ability to handle her fear.

There are many strategies which may be adopted by kids and parents to take care of the plethora of “night time critters”. Using a substitute such as a teddy bear or favorite doll can help ease the anxiety that a child feels when their parent isn’t around. Likewise, special bedtime routines like checking the windows are locked or the gate is protected can help the child to feel safe. And with a parent, older sibling or a pet which cries near by, or a parent to check on them before they go to bed, might be that they should feel safe.

The society we see on TV about the six o’clock news is one that frightens most adults. When kids see or hear of other children being taken from their beds or away from their families, and other terrible events, it has a profound influence on the child’s developing mind. As caring parents, we have to make sure that we provide not only a physically secure environment for kids, but also one that protects their psychological condition also. Fear manifests itself in our dreams, and the dreams kids are often vivid and understand no logical boundaries.

Most children fear something which may seem for adults to become irrational, yet it’s necessary for us not to dismiss those fears. The experience of fear itself is real, whether the “monster under the bed” or the witches in the area really exist. As parents, we will need to have an open ear when our kids want to discuss their fear.

Helping our children to develop the virtue of courage is an imperative in the world of today and might cause their survival in the world of tomorrow. We will need to work together with our children to help them to find their own solutions to their fears, whether it be a practice of assessing the home at night, or if it takes the kind of a large, protective, cuddly knight in brown fur.