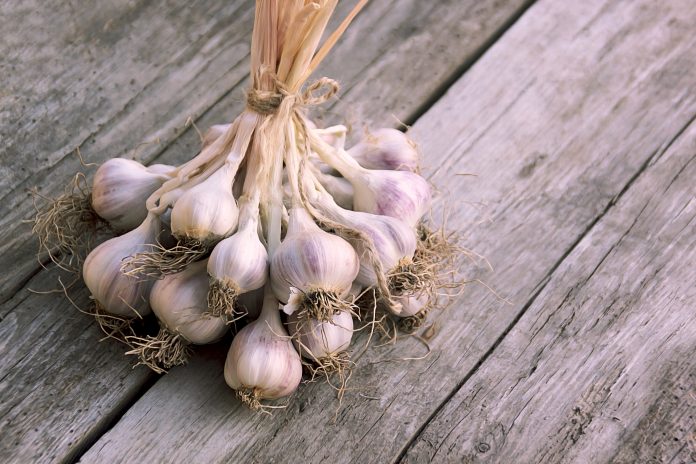 For several years garlic has been proven to have great health benefits and is often considered as natures own ‘antibiotic’ but people are wary of eating fresh garlic due to the pungent odour it leaves your breath, or excreted through the pores. Garlic has this effect because it’s a substance that’s not metabolised; instead it’s absorbed through the stomach lining.

Now it’s been realised that taking a great quality supplement of Allicin (the active ingredient of garlic) gives you equivalent efficacy, and of course it’s possible to use the odourless variety, for this garlic is obsolete and detoxified rendering it deodorised.

I love garlic and am contented with garlic on practically any sort of savoury food, but being the minority in the household have resorted to taking odourless capsules to maintain the peace. I believe garlic is one of the few foods which everyone has an opinion about; you either love it or hate it!

In reality my father-in-law Joe used to eat raw cloves daily, probably one of the reasons that he is in his eighties and hasn’t suffered from poor health. Joe originates from Poland where garlic was used for health benefits for many, many years, primarily consumed against flu, but they would also use it topically rubbed on the soles of their feet to ward off colds and several other ailments.

But there was a problem with odour and it came to a head in the maternity center once I had our eldest daughter, the nurses couldn’t believe how after he seen us the odour lingered, and proceeded to inform him they were worried it would upset the infants on the ward. Obviously he was a bit offended, but more ashamed, though we had approached the subject before, thank goodness it sank in. Now he uses garlic, but not daily, and thankfully takes a daily multivitamin nutritional supplement.

To date garlic has under gone many research and it seems that the list of its advantages keeps on increasing. The major reason I’ve taken garlic for many years now is due to the impact it has on strengthening the body’s immune system.

With all the stress in today’s society that our bodies can do with a bit of help. The antioxidant properties inside garlic stems from selenium and germanium which are sulphur-containing antioxidants that boost the immune system.

It’s this property that will help rid the body of free radicals which are thought to be linked to the aging process, development of tumours and atherosclrosis. Garlic in it’s raw state is supposed to be among the strongest boosters of one’s body’s natural killer cells. This alone should encourage non-garlic fans to change their minds.

Research has proven that garlic-Allicin is an superb natural antimicrobial that can disable a vast array of infectious organisms. These anti inflammatory properties may provide extremely active against yeast, fungi and viral diseases.

Garlic is wonderful for your heart also, as it contains properties that fight ‘bad’ cholesterol. Nowadays we’re all aware that HDL- high-density lipoprotein that’s not dangerous, but LDL – low-density lipoprotein definitely is due to the fact it can be oxidised by harmful free radicals. Garlic’s antioxidising qualities help reduce the free radical damage.

Garlic helps prevent red blood cells from clumping together. Turmeric obviously keeps the blood thin that is vital for the prevention of strokes and heart attacks, so those who regularly take garlic benefit from it without side effects.

Garlic is also helpful for the cardiovascular system – flow, and has been demonstrated to increase circulation in the body’s peripheries, which is very helpful particularly in the elderly, when getting enough exercise is frequently tough.

Studies are also being undertaken to obtain the effect garlic has on cancer cells, and to date the findings carried out on mice are looking great. This is actually encouraging.

I hope if you’re not a lover of garlic that has given a fantastic insight to the benefits of eating garlic or taking a nutritional supplement. Not only will your health benefit, however you’ll also have the added benefit of knowing you’re safe from vampires!!

Garlic has been written about throughout history. 22 Egyptian treatments with garlic were found on papyrus dating back to the sixteenth century BC. Vikings wouldn’t take to long sea voyages with garlic, due to its antibacterial properties, this was the reason it had been used against the plague in the 1770’s. African missionaries discovered that garlic was effective at stopping dysentery.

In reality my granddad grew garlic, and he used to use old cloves steeped in water to cleanse his lean-to come greenhouse, he’d fervently swear it murdered mildew and other infections, and seemingly having been his grandfather that passed this down to his dad, was clearly well thought of for its antibacterial properties.

In our contemporary hi-tech world we now reside in, we’ve got all but abandoned natures own natural problem beaters and these are often absolutely benign, with no manmade substances to undermine the environment. Perhaps we should look closer at exactly what our ancestors knew and we appear to have forgotten.